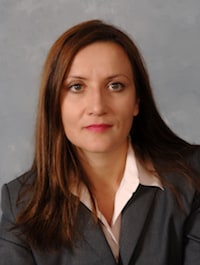 Immigration Lawyers on the Web, "Validity of PERM Labor Certification", 2008

Before joining Zneimer & Zneimer, P.C., she worked as an immigration attorney for a national law firm. Before this she was the Immigration Specialist of a Fortune 500 Company for several years where she managed the processing of all immigrant and non-immigrant employment-based visas, intra-company transfers, I-9 compliance, as well as the company's relationship with outside immigration counsel.

During law school Ms. Zneimer held a judicial externship with the U. S. District Court in Chicago and also interned with the Department of Justice as a judicial intern with the U.S. Immigration Court in Chicago. Ms Zneimer was a Notes and Comments Editor of Chicago-Kent Law Review and is a member of the Order of the Coif. She is a Certified Mediator by the Center for Conflict Resolution in Chicago.

Contact Us
Client Reviews
★★★★★
Someone rear-ended my car last spring and I was injured. Peter and Sofia Zneimer and they staff were professional and were always available by phone. I knew that the insurance of the other driver wasn't very good but they were still able to settle my case promptly and I was satisfied with the money I received. Overall, a very good trusted experience. Natig M.
★★★★★
I highly recommend the services of Zneimer and Zneimer. I often seek legal advice from them related to my immigration status and way forward. Both Sofia and Peter are very detailed and quick in answering any question. I laud their professionalism and a very efficient team that works for them. Suman S.
★★★★★
I totally recommend Sofia, she is the best lawyer in Chicago area. She is very professional, very detailed with her work and supportive. She always goes above and beyond to ensure the best outcome. Caring, compassionate and only the best for your family. I won my case because of her professionalism and her knowledge of the law. Aurel P.
★★★★★
I have dealt with Sofia Zneimer since 2009. She is a great lawyer and has helped me tremendously in navigating the process of green card. She is a great resource to have by your side. She is easy to reach. She responds very quickly, which was very important for me. If she can’t answer the question the same day, she does let you know that she is working on it. I would have no hesitation in recruiting her. Hemant S.
★★★★★
I called Zneimer & Zneimer after I was rear-ended on the highway. Peter and Sofia Zneimer have been very helpful in dealing with the insurance company and getting money for my car damage. They are also handling my injury case. They answer all my questions and I am always able to reach them on the phone anytime I want to talk to them. I am confident in having them represent me. The best choice i ever made. Thank you! Emil G.
View More
Submit a Law Firm Client Review